Above is a selection of photos of our prize-winners.

Ladies' County Captain, Jillian Milne, chaired the meeting, which saw some changes to the Committee.

Retiring this year:
We are sad to announce that after five years as President Pam Drysdale has decided to retire. Our Captain, Jillian Milne, paid tribute to all the hard work and support she has given to the County over the years. Pam's last duty was to present the trophies at the prize-giving.

New Additions:
We are delighted to announce that Dawn Butchart (Strathmore) is our new Honorary President. Pam Drysdale proposed her appointment at the AGM. It was unanimously agreed. A former Team member, Secretary and Captain for our County, Dawn brings a wealth of experience to the post.

Honorary Membership:
Our Captain, Jillian Milne, proposed that Honorary membership be given to Pat Colquhoun. A former Treasurer and Captain, Pat has been a long and faithful supporter of the County and the County Team. This was unanimously agreed.

Fixtures:
Our County Secretary, Jane Yellowlees, is finalising our meetings for 2020. We will publish details of the fixtures as they are arranged. 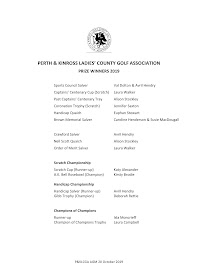