FORTH VALLEY SCHOOLS CHAMPIONSHIPS
The Forth Valley Schools Championship was held at Dunblane Golf Club last Thursday and I am delighted to say Elite Junior and Scholarship recipient Nicola Robertson won 2nd place with a 87.

Well done Nicola all your hard work is certainly paying off. Keep it up!
Posted by Dawn at 11:11 AM No comments:

COUNTY CHAMPIONSHIPS
Lots and lots of you have not yet entered the County Championships at Strathmore on May 11th. To avoid any disappointment, please please have your entries to me by Thursday 30th at the very latest.
Any queries please give me a call.
Posted by Dawn at 12:36 PM No comments:
Helen Holm Scottish Open Stroke Play Championship at Troon.

Annabel and Carly have both completed their first round of the Helen Holm. Carly has returned a 3 over par 78 and Annabel a 10 over 85.

Top of the leader board with three holes still to play is Irish twin Leona Maguire who is presently 5 under par. Tilly Holder and Kym Lawatt have both completed their rounds and are sitting in second position with 3 under par.

This years County Championships takes place at Strathmore Golf Centre on May 11th. The knockout rounds will then be held on May 16th and May 17th .

The entries are coming in fast now but could I please remind all players that as this is the County Championship Qualifier, this meeting will be drawn in handicap order. However if you are travelling with someone and require to be close in the draw then the lower handicap player will be moved down the draw rather than the higher handicap moved forward.

The evening players are out in the order they can arrive at the course following their working day. This is to enable all players to get out as soon as possible due to the possibility of lack of light. I would therefore ask you all to write on the entry the earliest time you can play in the evening.

Please please get your entries in as soon as possible.
Posted by Dawn at 12:03 PM No comments:

The winning scores were very impressive with Emily Ogilvy (Auchterarder) and her junior partner Megan Aird (Strathmore) along with Carly Booth (Comrie) and her partner Emily Aird (Strathmore) both returning one over par scratch 73. Emily and Megan pipping Carly and Emily by virtue of a better inward half. The handicap section was also closely fought with Dawn Butchart (Strathmore) along with partner Nicola Robertson (Dunblane) taking top spot from Laura Walker (Muckhart) and Ailie Burnett (Dunkeld) by .2 of a stroke. Dawn and Nicola returned 70.4 and Laura and Ailie returning 70.6.

We also had fun spot prizes, the winners were as follows:

Well done to all the prizewinners and many thanks to all who came along to support our juniors. Hope you all enjoy the slide show and as always if you want a particular photo please let me know!
Posted by Dawn at 11:18 AM No comments:

Tomorrow will see our highly successful Junior and Senior Event being played over Strathmore. This popular event will have 12 ladies who have either been or are County Team or Squad players or who hold a single figure handicap, play with 12 of our best junior girls. Each senior and junior will be paired and play a greensome competition. There are prizes provided for all winning juniors of the both the best scratch and handicap pairings. Tee time commence from 2.30pm if you wish to come along and support the girls.
The seniors taking part are Carly Booth, Emily Ogivly, Laura Walker, Dawn Butchart, Jane Yellowlees, Gillian Wallce, Kathleen Duncan, Janet Griffiths, Laura Cambell, Sandy Bushby, Meg Marshall and Pam Drysdale. The juniors are Emily Aird, Megan Aird, Ailie Burnett, Nicola Robertson, Erin Millar, Eilidh Watson, Laura Aitken, Siobhan Teague, Hannah Robb, Claire Gadsby, Kathryn Robertson and Roslyn Hall.

We are hoping for a super day of golf and hopefully the girls will all enjoy the experience. Special thanks go to Strathmore Golf Centre who have very kindly provided courtesy for the 2nd consecutive year of this very worthwhile event.

I will post the results as soon as possible.

Good luck every body!
Posted by Dawn at 10:40 AM No comments: 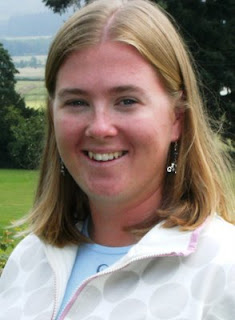 Perth and Kinross squad member Jacqueline Sneddon, a second-year student at Grand Canyon University, Arizona, has notched up her first victory in the United States.

Jacqueline kept her cool after a triple bogey at the final hole in the 36-hole Maverick Invite women's college tournament at Redlands Mesa Golf Club at Grand Junction, Colorado which cost her an out right victory after the regulation distance. That late, late slip meant Jacqueline had to go into a sudden-death play-off with Sadie Peavler (Mesa State College) who had led the Scot by eight shots with a first-round 69 over the par-72, 6452. They tied on 155 at the head of a field of 31 players with Jacqueline scoring 77 and 78 to Sadie's 69 and 86. And the first hole of the play-off was the 18th hole which Jacqueline had had her triple bogey only minutes earlier. But Jacqeline made no mistake this time and beat her opponent with a par to win the title.

"It was really exciting to get a chance to play the last hole again and play it like I knew I could," said Jacqueline whose outstanding display enabled Grand Canyon to win the team title by three shots from Mesa State College in a field of six teams."We all played solid. It's great for our team to get a win under our belt going into our last tournament."

Well done Jacqueline and many thanks to Colin Farquarson so EMailed the news to me and the photo!

What a lovely day we have for our very first meeting of the year and what an extremely good turn out as well. It was super to be able to play golf without any wind or rain!! The results were good to with County Captain Dawn returning the best scratch score of 78 and junior member Emily Aird (Strathmore) returning the best nett with 72. Well done to all.

Many thanks go to King James VI who always make us so very welcome.

Well done to all and look forward to seeing you all at Strathmore for our next County Meeting. May 11th.
Posted by Dawn at 5:18 PM No comments:

Emily Aird (Strathmore) certainly did P&K proud this week at the Under 16 girls at Craigielaw today when she returned a fantastic nett 67 in the second round!!! She went on to win 4th prize in the aggregate nett total and also best nett return on the 2nd round. Fantastic result not only nett but also scratch.

Emily also returned our best P&K scratch score with +24, Megan Aird was next with +35 closely followed by Eilidh Watson on +36 and Erin Millar on +40.

Well done Emily and all P&K girls who took part we are very very proud of you.
Posted by Dawn at 10:01 PM No comments:

SCOTTISH GIRLS UNDER 16 REPORT
Our girls have done us proud today at Craigielaw. Our top performers are Eilidh Watson and Emily Aird who both posted 86 closely followed by Megan Aird with 87 and Erin Millar with 96.

Well done to our girls and I will keep you posted!
Posted by Dawn at 8:01 PM No comments:
GOOD LUCK GIRLS!
Good Luck to Perth and Kinross Juniors Eilidh Watson (Muckhart), Erin Millar (Pitlochry), Emily Aird (Strathmore) and Megan Aird (Strathmore) who are all taking part in the Scottish Girls Under 16 Open Stroke Play at Craigielaw which starts today.
Good Luck and I will keep you posted of their progress.
Posted by Dawn at 11:11 AM No comments:

At last its our first County Meeting and Lenore has kindly done the draw. Look forward to seeing you all next Tuesday!

Today was the first match for our wonderful P&K Team and Junior squad and I am delighted to say that we had a brilliant over-all win of 4&2. Our senior teams result was 3&1 and the juniors 1 win each.

Emily and Fiona were first off and up against Stirling and Clackmannan Captain Linda Allan and her partner Louise MacGregor. Both pairings played well and had a very close and tense match which ended at the 18th with the our girls 2 up. Laura and Eve were second up against Vicki Stevenson and Tricia Chillas. Eve and Laura managed to close out the game early with the best win of the day for the seniors with a 4&3 2win! Next up were Laura Campbell and Jillian Milne who were up against Claire Capucci and Karen Burns who played extremely well and our girls went down 5&4. The last senior pairing was Yellowless and Megan Aird. Megan, a junior member, who was drafted into the senior squad at the last minute following a cancellation, really did not let the occasion get to her when she slotted in two 4 foot putts in the last two holes to place Jane and Megan 2 holes up a the end of play. Well to both.

The junior pairings also were superb. Emily Aird teamed with a new player to our County Events, Hannah Robb, and both players really did us proud. They played extremely well however lost to an excellent Stirling pairing 3&2. The other P&K junior pairing of Nicola and Elidh were awesome. I caught up with them at the seven and they were 7 up and only 2 over par! I then caught up with them thru 9 and again they were 9 up! They went on to win the match with phenomenal 9&8. WOW!

Therefore the overall winners on the day were P&K 4&2. Well done to all our players and what a great start to what I hope will be a fantastic year once again for Perth and Kinross!
Posted by Dawn at 9:15 PM No comments:
Newer Posts Older Posts Home
Subscribe to: Posts (Atom)

Perth & Kinross won the Northern Division Jamboree at Ballater today. Over the three days they played some amazing golf to triumph... 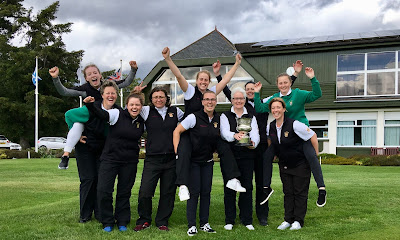 When you try to print downloads from any of the above. Click on the one you wish to print this will take you to Google Docs. There you will see a printer icon, click on this icon and the document will go to your printer.

If you have problems call me and I will be very happy to talk you through the process. Daytime 01828 633000