Joan Lawrence MBE, "a legend of Scottish Woman's Golf", passed away in hospital last Thursday night, after suffering a stroke. She was 89. 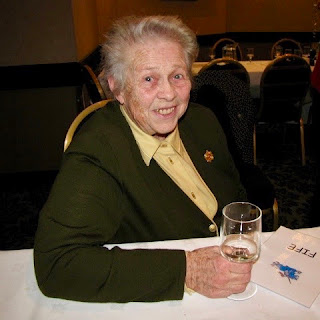 Joan at the SGLA Centenary Lunch in 2009

Please note that due to COVID-19, the funeral will be held in private.

Joan Barrie Lawrence, MBE (1930-2020)
Joan was born in Cupar in 1930. Her father was a greenskeeper at Cupar Golf Club and lived on the edge of the course. At the age of 9 she took up the game of golf. It was a beginning of an incredible amateur golf career.

A fierce competitor with a deadly short game, she played at the highest level of the amateur game. She won the Scottish Ladies' Amateur Championship three times from 1962 to 1964, only just missing out on a fourth title when she lost in the final to Belle Robertson in 1965.

She was also Vice-captain at the Curtis Cup in 1970 and Captain of the GB team that won Commonwealth (now Astor) Trophy in 1971.

Joan's talents were not limited to her activities on the course. She was a highly respected organiser, administrator and selector. Her wealth of experience and knowledge was invaluable for the numerous golf committees and boards on which she served and chaired.

She was a British Selector for eight years and the Chairman of Selectors from 1986-1988, during which time GB&I won the Curtis Cup twice.

In 1999, Joan was awarded a MBE, "For services to Ladies' Amateur Golf", in the Queen's Birthday Honour's List.

She was a great character and a great golfer. She will be missed by many.

COLIN FARQUHARSON HAS DECIDED TO RETIRE

Colin Farquharson, the editor of the Scottish View Golf website, has decided to call it a day. He will no longer be posting on the blog. 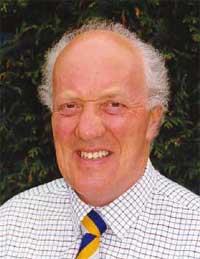 Based in Aberdeen, Colin’s career in journalism began in 1953 as a copy boy for the Press & Journal. After he retired as Sports Editor for the newspaper in 1997, he continued to promote the game of golf as a freelance golf writer and photographer.

The Scottish Golf View website launched in May 2006. At that time there were no smart phones or tablets and social media was still in it's infancy. With Colin's enthusiasm for posting news about all Scottish golf and Scottish golfers, whether home or abroad, it quickly gathered a loyal fan base. At it's peak in 2015, it had over 175,000 hits in a single month.

Over the years, Colin's efforts to promote the great game of golf did not go unnoticed by his peers. In 2018, the Association of Golf Writers awarded him an honorary lifetime membership.

Colin has always been a great supporter of Scottish women's amateur golf. His coverage of the progress and success of all our junior, woman and senior golfers will be missed. 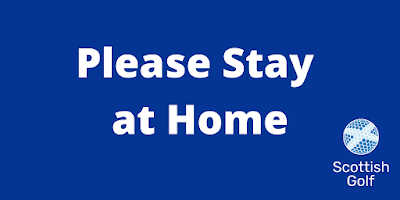 Scottish Golf has asked all golfers in Scotland to refrain from golf until further notice.  To read their full statement click on the link below:
https://scottishgolf.org/covid-19-update-monday-23-march-2020/

The message from the Government and Scottish Golf is clear.

For now, golf is NOT an option. Instead, we must all stay at home and play our part in containing the spread of COVID-19.

We'll keep you posted on any further updates from Scottish Golf. In the meantime stay safe, follow all the Government guidelines and look after yourselves.

Unfortunately, due to COVID-19, all our annual friendly County matches in March and April have been cancelled. The matches affected are:

Whether any of these fixtures can be re-scheduled to a date later in the season is unclear.

The County Fixture Books are in production and will be issued out to the clubs shortly, but in an effort to get things moving we’ve already sent out a County email to our members with an advance copy of the following:

If for any reason you've not received the email, please contact the Secretary!

Renewal Form
Please return your completed form along with your annual subscription to our Treasurer, Catherine Monks. All the details you need are on the form.

Fixture List
There are some cracking venues for our events this year including the North of Scotland, which we are hosting on our home turf at Blairgowrie. Make sure you get all the dates in your diary.

Finally
More information about our competitions will follow, including options to enter online, so keep an eye on your inbox and the website.

Posted by Jane at 11:55 AM No comments:
Newer Posts Older Posts Home
Subscribe to: Posts (Atom)