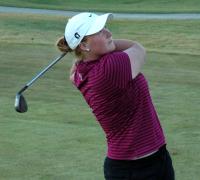 County Squad member Emily Ogilvy totaled a 328 (84-77-77) to earn a share of 11th place at the North Texas/UALR Golf Classic in Denton, Texas on Monday and Tuesday of this week. Her fellow student at Arkansas-Little Rock- freshman Sara Wikstrom recorded her first victory of her collegiate career in the event finishing seven strokes clear of second place.
Their efforts along with team mates, Anita Ojeda and Christina Petersson helped the team to capture their second team title in their last three outings. Well done Emily!
Posted by Janet at 1:07 PM No comments:

Just a wee reminder to get your entries sent off to meeting convenor, Lenore Kyle for the first round of the Nell Scott Quaich at Pitlochry on Thursday 13th April. The closing date is this Thursday - don't miss out!
Posted by Janet at 4:48 PM No comments:

Notwithstanding any local rule that a golf club may have invoked, the use of distance measuring devices is prohibited in any County event during 2006. The use of such a device is in breach of rule 14-3, the penalty for which is disqualification.
Posted by Janet at 6:03 PM No comments:

A final round of one over par 72 gave County team player Emily Ogilvy a very creditable fifth place in the Rio Verde Invitational in Arizona. A wonderful recovery from a disappointing first round also helped Emily's team of Arkansas-Little Rock secure third place overall in the team event. Well done Emily!

County Team Member Emily Ogilvy scored a magnificent 69 to improve to tied 6th place in Arizona College Tournament with one round to go.

Emily Ogilvy produced one of her best rounds on the American college circuit to shoot up into sixth place in the Rio Verde Invitational women’s college tournament at Rio Verde Country Club, Arizona.Emily, a golf scholarship student at the University of Arkansas-Little Rock, matched the lowest score of the second round – a two-under-par 69 – over the White Wing course.She improved by a staggering 13 shots on her first-day performance when her score of 82 included four double bogeys.Her 36-hole tally of 151 is seven shots behind the leader, Amy Schmucker (Michigan) with one round to go. She birdied the 18th and the second, bogeyed the sixth before finishing on a high with birdies at the 10th and 13th for her 69.Emily’s brilliant performance almost enabled her university to return the lowest team total (293) by far in the second round. Arkansas-Little Rock go into the final day in fourth place of the 17 teams. Northwestern (597) lead.

Posted by Janet at 10:55 AM No comments:
Newer Posts Older Posts Home
Subscribe to: Posts (Atom)