Lenore is now looking forward to playing in the P&K Champion of Champions which takes place on September 25th at Gleneagles Queens Course.

If you are a P&K Club Champion make sure you have your entry form in for this event.
Posted by Dawn at 2:22 PM No comments:

Seventy eight club teams from across Scotland took part in the Scottish Match Play Foursomes 2011. This tournament started out in back April and is a knockout foursomes event. P&K Club Dunkeld and Birnam made it through to the finals which were held at Glenbervie Golf Club on Sunday 28th.
The other teams who played their way to these stages were Dirleton Castle,  Bridge of Allan and Crichton. Dunkeld and Birnam were represented by Anne Walker and Sheila MacDougall. In the morning the first of the semi-finals was between Dirleton Castle, represented by Hazel Saunders and Terry Reekie and Dunkeld & Birnam, this proved to be a very tight match throughout, going down to the very last putt on the 18th green which Hazel Saunders holed to clinch the match for Dirleton Castle, one up.


The second semi-final was also an excellent match, however the Crichton pair of Rachel Walker and Amy Little took advantage of their longer hitting in the windy conditions and won through against Carole Mackay and Janis Myles of Bridge of Allan by 4 & 3.

Crichton once again made their longer hitting count in the final against Dirleton Castle, winning the match by 7 & 6 and taking the title of Scottish Match Play Foursomes Champions for 2011.

Unfortunately Dunkeld and Birnam duo lost out in the match to decide third & fourth places in the afternoon when Bridge of Allan won at the 16th hole.

Congratulations to Dunkeld and Birnam team in making it so far in this national event.

Following an outstanding win at the North Division County Finals in June our P&K team will be making their way to Dumfries and County Golf club on September 15th in preparation for the Scottish County Finals. The tournament itself will take place on Friday 16th Saturday 17th and Sunday 18th. Representing the south is Dumfries, East is Mid Lothian and West is Ayrshire. Our team members are as follows:

It is also hoped that we will have some travelling supporters!

We wish the team all the very best of luck in there endeavours to bring hope the Scottish Trophy.
Posted by Dawn at 9:42 AM 1 comment:

Carol Muir our match secretary has asked me to post the following report following a freindly match the team played on Tuesday night. Below is a slideshow of the night.

The P&K Ladies team of - Laura Walker / Eilidh Watson; Eve Muirhead / Jillian Milne; Fiona Ramsay / Nicola Robertson, Jane Yellowlees / Gillian Wallace, played a foursomes match against the County Men on Tuesday evening over the Lansdowne Course, Blairgowrie G.C. This had been scheduled to be played in June but had to be postponed due to torrential rain/gales.


Although perfect conditions for playing golf the Men were in no mood to have a repeat performance of last year's result when the Ladies won. Unfortunately, with a little jiggery pokery of the rules and the Ladies not receiving any shots this year, the team was fairly comprehensively beaten with the exception of Fiona and Nicola who played well to ensure their game ended All Square. Final Result was 3 1/2 - 1/2.

Iain Simpson, Men's County Secretary has confirmed that this should now be an ongoing annual fixture and is putting up a Trophy to be competed for - now we will have to look at the rules!!

Anyway, a good night was had by all and the course itself was in great condition with excellent greens and the hospitality provided afterwards was enjoyed by all.

Thanks to Carol for forwarding her report and we wish the girls all the best for the County Finals at Dumfries. I will post more info regarding the finals soon.

The Ladies of Kinross Golf Club are holding their Ladies Open on Saturday 10th September 2011 on the Montgomery Course!

This may be the last opportunity of the season to play in an open so why not come along!

This year the popular Adult-Girl Foursomes takes place on P&K soil at the lovely course at Auchterarder GC. The date of the fixture is Sunday 25 September 2011.

The format is an 18 hole foursomes Stableford competition. It is open to junior girls (under 18 years on January 1, 2011), partnered with a lady or gentleman with a CONGU handicap. There are separate sections for the various handicap categories and pairings with a junior without a CONGU handicap will also have their own section.

As this is on our patch please try and encourage your girls to take part by offering your services! A great day out and a super way for the girls to take part in a Scottish Event.
The closing date for entries is Monday 5 September. To download an entry form click on this link ADULT & GIRL FOURSOMES ENTRY FORM

Lets get a large entry from P&K and have a great day out with our stars of tomorrow!
Posted by Dawn at 6:05 PM No comments:

Jane Yellowlees has forwarded some info regarding the Murrayshall Mixed Open which is being run by the ladies section of Murrayshall. If you would like to enter please see details below and entry form 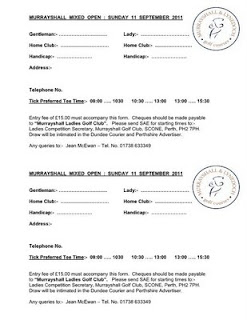 Kathleen Duncan is the 2011 Pitlochry Club Champion. Kay Knight was runner-up. However Kay did pick up Club Champion title at Strathtay Golf Club

The final County Meeting of this season will be the Greensomes at Callander on Thursday 15th September at Callander!
Please send your entries to Pat Colquhoun as soon as possible.
Unfortunately this is clashing with the practice round at Dumfries and County Golf Club prior to the County Finals so the County Team and officials will not be available to play at Callander.

Posted by Lenore at 5:48 PM No comments:

The morning players enjoyed perfect conditions for golf but unfortunately the evening players experienced torrential rain causing flooding on the greens and throughout the course so the competition had to be abandoned.

Consequently According to Clause 18.6 of the CONGU Handbook for all those who returned a score no CSS can be calculated so the SSS of 71 applies for decreases and no increases will apply!

Posted by Lenore at 9:53 PM No comments:

Kathleen Duncan has contacted me with details of The Pitlochry Ladies Open which is being held on Sunday 28th August.

For more details and entry information call Kathleen on 01796 473353 or email kathleenduncan4@gmail.com

Have a great day 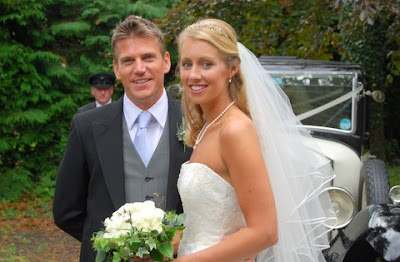 Former Team member Alex Bushby married Robert Nisbet this Saturday. We all send our very wishes for a happy life together.
You look stunning Alex!
Posted by Dawn at 4:15 PM No comments:

Grace Paterson has contacted me this evening to ask if I could give all Senior Ladies (55+) a wee reminder to enter the Senior Ladies Open at Dunblane. This is being held on Wednesday 7th Sept. The entry fee is £10.

Please contact Grace for your place to play on this lovely course. Telephone number 01786 823418 or email Grace on gracepaterson@live.co.uk

Enjoy your day!
Posted by Dawn at 9:09 PM No comments:

Laura Walker has forwarded the draw for Muckhart which is Captains Day. If you wish a late entry please contact Laura.
Click on the image to enlarge 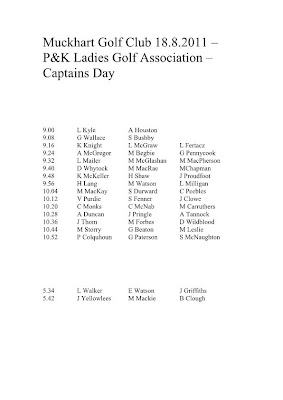 Gwen has kindly updated me with the latest scores the P&K Scratch League to view the table and see the individual scores click on the page SCRATCH LEAGUE at the right hand side of the site.
Posted by Dawn at 10:21 AM No comments:

Caroline Dunbar has contacted me regarding next weeks Aberfeldy Opens details are as follows:
LATE ENTRIES WELCOME

Congratulations to junior member Laura Aitken who won the Killins Ladies Championship on Saturday against Liz Stevens. She won 3 and 1.