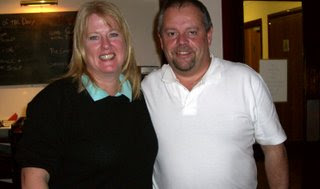 Congratulations to County Vice Captain Dawn and her husband Iain who won best nett at the Royal Montrose Greensomes Open yesterday (Sunday). They scored a magnificent scratch 71 nett 64.6 - I can confirm it was magnificent because my husband and I played with them! - Well done Dawn & Iain.

Posted by Janet at 3:58 PM No comments:
Labels: Congratulations

An excellent final round of 76 saw County squad member Roseanne Niven (Crieff) finish tied for 36th place in the 54 hole Women’s PAC 10 Championships being held at the par 72, 6196 yard Broadmoor Golf Course in Seattle, Washington. Roseanne’s 1st and 2nd round scores were 86 and 81 respectively. Today’s score which included two birdies helped her team to a 5th place finish on 926 – the seventh time the CAL team have finished in the top 5 in this tournament. Arizona State University which included the joint leader Anna Nordqvist (second after playoff with Tiffany Joh - UCLA) won the team event with a total of 897.

REMINDER
The closing date for entries for the County Championships is this weekend and the draw will take place on Tuesday 1st May - please send your entries to the convener for the meeting - Janet Griffiths, 47 Tay Avenue, Comrie. PH6 2PF
MANY THANKS
Posted by Janet at 7:45 PM No comments:
Labels: County Fixtures 07
The County senior squad and junior county members enjoyed a warm welcome from Stirling & Clackmannanshire County for our annual match held on Sunday. The match was held at Falkirk Tryst - a golf course some of our number (including myself) had some difficulty finding! The course was in very good condition and everyone enjoyed the event. The match finished 2 - 2 for the senior squad and 3 - 0 in favour of Stirling & Clackmannanshire for the junior players.

Our thanks to Captain Elaine and her team for their excellent hospitality.
Posted by Janet at 7:36 PM No comments:

Congratulations to County squad member Jacqueline Sneddon (Alyth) who came third in the recent Nick Faldo Junior Series Qualifyer scoring 87 on the Lansdowne Course at Blairgowrie. The winner with a score of 84 was Cara Easton of Dalmahoy .
The 2nd Scottish qualifying round will be played at The Carrick on Loch Lomond on May 28. The Scottish final of the Nick Faldo Series will be held at The Roxburghe on August 23.
Well done Jacqueline and good luck for the next round.
Posted by Janet at 1:03 PM No comments:
Labels: Congratulations

RACE NIGHT
Please note that the Race Night planned for Friday 20th April 2007 at Craigie Hill G C has been cancelled
Posted by Janet at 4:07 PM No comments:

Nine of the County senior squad (pictured with Captain Janet and Vice Captain Dawn) attended for a practice round on Royal Montrose Golf Links yesterday in preparation for the 2007 Inter Counties Jamboree which is to be held at Cruden Bay, Aberdeenshire in June. The conditions were perfect if a little calm and the course was in first class condition. The best scratch of the day was Alexandra Bushby (76), second was Fiona Ramsay (79) and third was Gwen Lambie (81). The groups of three also played the 6 point system which helped to hone their matchplay skills. Montrose have agreed an excellent rate for the squad to use the course for practice and we thank them very much for this and their very friendly welcome on Sunday. The squad have been encouraged to return to Montrose as often as possible between now and June to take advantage of this excellent offer. A further practice round for the squad is arranged for Scotscraig on 5th May.
Posted by Janet at 8:14 AM No comments:

What a glorious day we had for our very first County Meeting yesterday. The course was also in fabulous condition, a huge thank you to all a Craigie Hill and also our convenors Carol Lambie and Lenore Kyle for their organisation.

Taymouth Castle member Anthea Allan played excellent golf and returned a nett score of 68. Well done Anthea. The best scratch player of the day was County Squad member Gwen Lambie, Dunkeld and Birnam, with a 78. For the mere moral of us the CSS was 72, reduction only! Full results are as follows:

Don't forget to get your entries in for the Championship Qualifier at Kinross on May 10th. Please send entries to Janet.
Posted by Dawn at 5:06 PM No comments:

RACE NIGHT
Please note that the Race Night planned for Friday 20th April 2007 at Craigie Hill G C has been cancelled
Posted by Janet at 8:33 PM No comments: 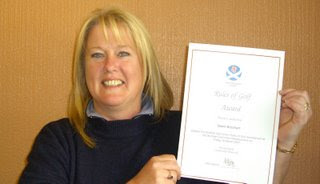 Congratulations to Vice Captain Dawn Butchart who has been studying for the SGU and R & A Rules Official qualification. Dawn passed the course with flying colours - achieving 85% in the end of course exam. Here is her story:

'When Jane (Strathmore Lady Captain) asked if I would be interested in going on a Rules Official's course which was to be organised by the SGU and the R&A I was very happy to take part, however at the beginning of the year I received the 'Rules and Decisions Book', example papers and the information regarding what the exam entailed I was a little apprehensive if not scared! Participants had to learn the first 28 rules and subsections and familiarise themselves with the decisions pertaining to them all! No mean feat when that part of the book is 436 pages long. I decided to set aside a few hours every day and even took the book and papers on holiday. After a few months of study a two day course was held at the Headquarters of the SGU. This was both enjoyable and informative with talks from SGU officials, International Referees and R&A officials. There were also slide shows and a practical session held at Drumoig golf course. At the end of the course was the dreaded exam. This was in two parts. The first section of the first exam was a 20 question paper which gave different scenarios which you had to know the rule number and subsection of each one, without reference books. The second part again was 25 questions on a true or false basis again without reference books. The second part of the exam lasted 90 mins and although we were permitted the reference books it was very tough! However three weeks later I have received my results. The required pass was 70%, the average mark for the course was 71.6% and I am really pleased to say I managed 85%. This now qualifies me to referee at Club and Area level. So I would like to thank Jane for having faith in me and should you have any queries regarding rules please ask, if I don't know the answer straight away I now know where to look!'
Well done Dawn from everyone at P & K!
Posted by Janet at 5:55 PM No comments:
Labels: Congratulations 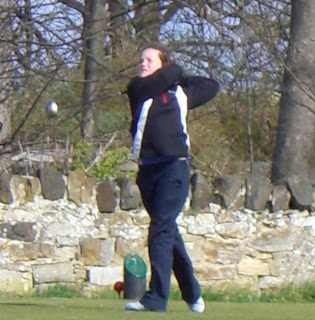 Congratulations to County squad member Annabel Niven who competed in the Under16s Strokeplay Championships held at Craigielaw Golf Club last week. In very difficult conditions Annabel who represented Scotland team 2 scored a very creditable 170 (82, 88). The event was won by 12 year old Leona Maguire from Slieve Russell with an excellent pair of 74s. The Scotland team 2 (327) were placed second in the team event which was won by England (299). Annabel's team mates were Cara Easton and Jill Meldrum. 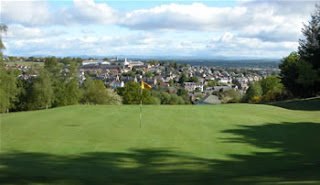 FIRST MEETING OF 2007
CRAIGIE HILL
Our first meeting of the 2007 season takes place at Craigie Hill on Thursday 12th April. Carol Lambie is convening the meeting.


The draw is as follows:

Should you have any queries please contact Carol. Here's hoping the sun will shine!
Posted by Dawn at 9:24 AM No comments: 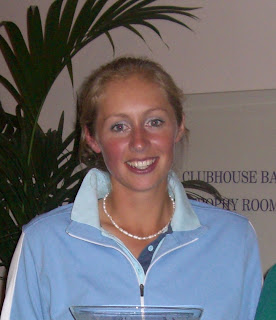 Congratulations to County Squad member Alexandra Bushby who took part in the Halford Hewitt Tournament on the Royal Cinque Ports golf course in Deal in Kent last weekend. The tournament which is for old pupils of public schools throughout the UK attracted 640 competitors. The teams play foursomes knockout. Alex's old school Glenalmond beat Stonyhurst in the first round then lost a very close match to Malborough. Alex won both her matches (4 & 3 and 6 & 5) - making history in the event - being the first girl ever to win a match in the tournament. Alex's partner was also very pleased - it was his first win in 6 years of playing in the tournament.