We had a glorious day to play our Perth and Kinross County Champion of Champions on Saturday. Gleneagles, as always, made very gracious hosts and all our players had a great day playing over the PGA Course.

We also were delighted to have a new name on the trophy. Gwen Lambie of Dunkeld and Birnam picked up the trophy with a 82. It was very pleasing for us to see Gwen lift the trophy as she has been the runner-up in two occasions.

Unfortunately none of the P&K Pairings made it onto the score board yesterday at Longniddry Golf Club. However our congratulations go to the winners listed below:

County Team player Carly Booth just needs one more good round today and she will secure a seat on a plane to Brazil next month!! At the halfway stage of the Faldo Series’ only Scottish qualifying tournament, at the Renaissance Club, Archerfield in East Lothian, Carly leads her age/sex categories and of course the winners of each category will win all-expenses-paid trips to the Itanhanga Country Club, Rio de Janeiro for the Faldo Series Grand Final.

Carly has a four-shot lead in the Under-21s with halves of 36 and 40 for a 76. Her nearest rival is Jenna Birch who had halves of 41 and 39. So all to play for today. Also taking part in the finals is Junior Member Emily Aird from Strathmore. We wish you both all the best today.


The final of the Commonwealth Spoons will be held today at Longniddry. Four couples from P&K are taking part they are Margaret Hunter & Sandy Busbhy, Heddie Shaw & Sally Crystal, Helen Lang & Clara Webb and last but not least Angela Crossland & Myra Macleod. The tee off times for our pairing are 11:24, 11:42, 12:00 and 12:06 respectively.

We wish all our players the very best of luck and I will try very hard to keep you updated throughout the days play.
Posted by Dawn at 9:58 AM No comments:

Fife County Ladies Golfing Association:
Fife County Ladies are holding a Centenary Open at Dunfermline Golf Club on Sunday, September 27.
Tee-times: from 9.30 am – 1.30pm.
The competition is open to members of any county association in Scotland.
Scratch & Handicap Prizes. Entry Fee: £12 .
It would be great to have some representatives from each county participating in this event, so please come along and join us in our celebration of 100 years of county golf in Scotland.
Entries to: Mrs Margaret Steele, 26 South Dewar Street, Dunfermline, Fife KY12 8AR (Tel: 01383 721840) .
Posted by Lenore at 5:40 PM No comments:

CRAIGIE HILL LIFT SCRATCH LEAGUE TROPHY
Last night was our Scratch League AGM, Dinner and presentation which was held, hosted and won by Craigie Hill. Craigie Hill have an extremely strong team which consists of many past and present County Team players. They scored 11 points closely followed by Blairgowrie and Strathmore who were joint 2nd on 10 points. The winners were presented with their trophy by myself as County Captain and they were congratulated on their sucess. Above is a photo of Alison Stockley, Carol Muir, myself, Jillian Milne and Val Pringle receiving their trophy.
Eight teams take part they are Alyth, Auchterarder, Blairgowrie, Craigie Hill, Crieff, Dunkeld, Pitlochry and Strathmore. The games are played over the summer months in great spirit and enjoyed by all who take part.
During the AGM, GPS Devices were discussed and was unanimously agreed to allow these devices in Scratch League matches. Chairperson Alison Stockley also asked for a re-vamp of Scratch League rules as they were a little dated!! This was discussed and new rules will be produced shortly.
A vote of thanks was made by Blairgowrie Scratch League organiser Susan Arbuckle and we all retired for a lovely supper and a catch up with friends.
Our warm congratulations go to the team.
Posted by Dawn at 1:04 PM No comments:

Saturday will see the P&K County Champion of Champions take place at Gleneagles PGA Course. The draw is below.

Following a committee meeting on Monday the use of GPS Devices at County meeetings has been passed. Therefore all players may use one from this event onwards.

We wish you all the very best of luck, see you there.
Posted by Dawn at 11:05 AM No comments: 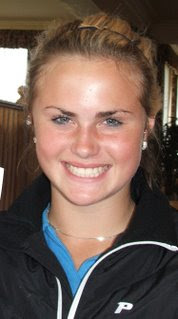 Team member Carly Booth has been named in the GB& I squad who will be preparing for the 36th Curtis Cup match which will be played at Essex County Club, Massachusetts from June 11 to 13, 2010.

Carly was choosen for the team last time at St Andrews and we all hope she is selected agains next year.

This is one of the youngest Great Britain & Ireland squads for the biennial Curtis Cup match against the United States has been named by the Ladies’ Golf Union. Carly holds the record for the youngest ever player at the age of 15.

Great news for Carly. Well done.
Posted by Dawn at 12:16 PM No comments: 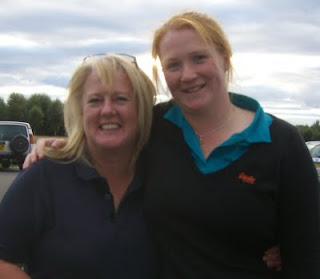 
Team member and stalwart of Perth and Kinross L.C.G.A. Emily Ogivly is flying off to Australia on Monday on a one year working visa. Emily is just the best advert for County golf, she has come through the junior section and although represented her Country on numerous occasions has never once forgotten her roots. Emily has always,without question, been delighted to represent P&K every year.
I personally have got to know Emily very well over the last 10 years, I have known her both as a fellow team member and then when I moved on to an official. I have always found her to be a brilliant golfer who is very enthusiastic about her and her county's golf but more importantly Emily is a very genuinely lovely girl. I will miss her very much .
I was delighted when Emily accepted an invite to come along to partner me at Strathmore's invitation day, we thoroughly enjoyed our day and we were thrilled to pick up 2nd place. It was lovely spending time with her before she jets off. I wish her well and hope she enjoys the experience.

Have a ball Emily all best wishes to you from P&K.
Posted by Dawn at 9:46 AM No comments:

Unfortunately Scotland did not keep the advantage from the mornings play and with only Carly
winning in the afternoon Wales took the title. However Scotland were a very credible 2nd place.

Following a draw between Wales and Ireland yesterday Scotland must win or draw today to lift the trophy later today.

A good start to the day has been made when Team member Carly Booth and her partner Kelsey MacDonald won their foursomes match 3&2 and Kylie Walker and Jane Turner won 2&1 and although Louise Kenney and Pamela Pretswell lost their very close match 1 down the Scots are in the driving seat with a 3-1 lead this morning.

Good Luck this afternoon girls!
Posted by Dawn at 12:56 PM No comments:

Today was the final meeting in the 2009 calendar and what a beautiful day we had. It was wall to wall sunshine resulting in some good scoring. In particular team member Jane Yellowlees who returned a gross 76 which was only 2 over the CSS 74. Well done Jane and many thanks to Liz Miskimmin for convening the meeting. Full results are as follows:

Well done all and remember to keep Wednesday 21st October free for the AGM at Craigie Hill at 6.30pm.
Posted by Dawn at 6:58 PM No comments:
HOME INTERNATIONS NEWS!

Yesterday Team player Carly Booth along with her fellow Scottish team mates came back from 1-2 loss in the morning to win the opening day against Ireland 5-4. Below is the full results:

In the other match Wales beat England by a resounding 7-2.

Today Scotland played England and following the mornings play were 3-0 up. Carly again was first out partnering Kelsey MacDonald and they won their match 2&1, however England came back fighting and took 3.5 of the possible 6 afternoon points making the win for Scotland 5.5- 3.5. Results from the day are as follows: 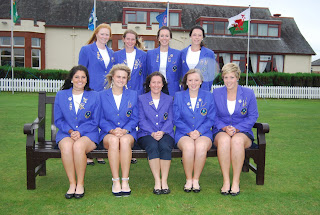 IRVINE WET BUT PLAYABLE FOR WOMEN’SHOME INTERNATIONALS
After what has been a very wet few days (and weeks) the Womens Home Internationals began today and our very own Carly Booth has been selected along with Kelsey MacDonald to lead the Scottish team in the foursome matches this morning. Above is a photo (courtesy of Cal Carson) of our Scottish Team.
Good luck to all, below is the pairing for this mornings matches against Ireland.
SCOTLAND v IRELAND
9am:
Kelsey MacDonald & Carly Booth v Danielle McVeigh & Charlene Reid.
Louise Kenney & Pamela Pretswell v Gillian O’Leary & Victoria Bradshaw
Kylie Walker & Megan Briggs v Mary Dowling & Sarah Cunningham.
Posted by Dawn at 11:13 AM No comments:

The Ladies Home International’s matches are being played at Irvine (Bogside) Golf Course in Ayrshire from 9th – 11th September.

Scotland have a very strong team, including Curtis Cup players and winners of several International amateur events and must have an excellent chance of winning the Home International’s for the first time since 1991 (no pressure girls!). Why not come along and support your team. You are guaranteed to see some great golf and some exciting matches.

The Scottish Team is:

The order of play is as below with three foursomes matches teeing off from 8:30am each morning and six singles matches from 1:10pm in the afternoons: 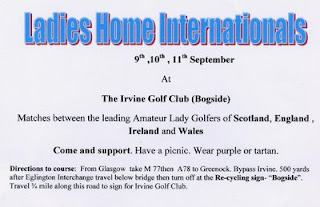 Our final meeting of 2009 will be held at Dunblane on September 10th. If you would like a late entry please contact Liz.

The draw is as follows: