The P&KLCGA Annual General Meeting and Prizegiving took place at Craigie Hill on 22nd October. The meeting was presided over by retiring Captain Carol Muir. President Pam Drysdale presented the trophies to the Prizewinners.


A vote of thanks was given by Jen Saxton the P&K County Champion. 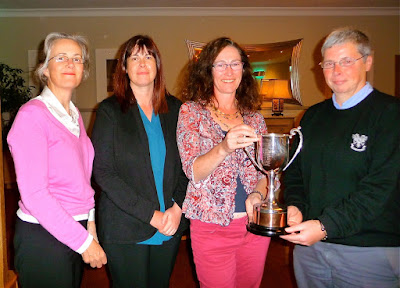 Our thanks go to Blairgowrie for a lovely dinner last night and in particular Heather and Gillian Wallace for all their efforts this year. Next years hosts are Craigie Hill, however the floor was sad to hear Crieff would no longer be taking part.

Above is the Muckhart team being presented with the trophy from County Captain Carol Muir and below is the full results for 2015. 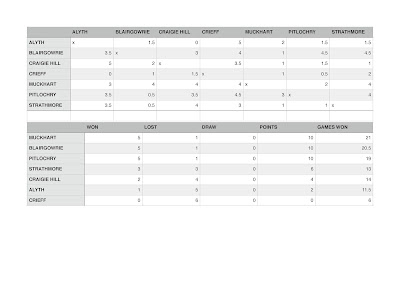 The SLGA and SGU have now officially amalgamated and Scottish Golf is the new governing body for the sport of golf in Scotland. Eleanor Cannon is the first ever chair of Scottish Golf.

If you have missed some of the coverage in the media you can catch up now.

Eleanor’s radio interview with BBC Scotland was aired this morning on Good Morning Scotland, and look out for a further feature on tonight’s Reporting Scotland.

Eleanor video on Scottish Golf TV: https://www.youtube.com/watch?v=ACmQDgBTyQY with further video messaging from ourselves to come from the likes of Paul Lawrie, Marc Warren, Carly Booth and Pamela Pretswell.

As mentioned, our social media handles have now changed to @ScottishGolf on Twitter and Scottish Golf on Facebook, so make sure you are following us. It’s been a busy day on social media with further messaging from us later today / tonight so get involved! Those celebrating the good news with messages today on Twitter include Pamela Pretswell, Fred MacAulay, Wallace Booth, Gabrielle Macdonald, SSE Scottish Hydro, GolfKings and Aberdeen Asset Management.

Thanks also to all staff who contributed to our Thunderclap which went out at 12 noon on social media, with a reach of over 250,000.

Images from the launch can also be viewed at our Scottish Golf Flickr page: https://www.flickr.com/photos/scottishgolf/

Posted by Unknown at 8:46 AM No comments:
Newer Posts Older Posts Home
Subscribe to: Posts (Atom)