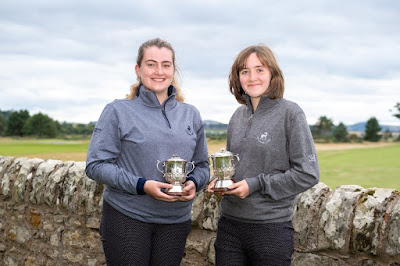 Isla Johnston, aged only 14, and Lauren Cameron, 22, from Pitlochry Golf Club posted a score of 39 points in the handicap stableford foursomes format to emerge as the winners from 16 pairs at the Eden Course.

Cameron, a 19-handicapper, only returned to the sport last year after a 10 year break, while 22-handicapper Johnston, has been playing at Pitlochry since the age of six. They are one of the youngest ever pairings to have competed.

After her win Isla Johnston said:

“We’re so happy, it’s amazing to win. I’ve been playing for eight years now as Pitlochry has a really good junior policy. I like going to new clubs as I play a lot of Pitlochry, so getting a change of scenery is really nice.”

“I think we knew we had a chance today, but I don’t think we would do it. It was great just to reach the Grand Final. I played golf when I was younger, then took 10 years off, and I only started again last year. We both come from families of golfers as well, so that really helps. It’s a great team event and we’ve loved competing in St Andrews and being part of this final.”

The winning duo can now look forward to competing in the Pro-Am for the 2022 AIG Women’s Open at Muirfield thanks to their victory.

Final call for the Junior Tour Scotland Event at Blairgowrie Golf Club (Landsdowne) on 10 October 2021. The event is open to both Girls & Boys.

Entry Form: If you wish to enter, please click on the link below:
Junior Tour BLAIRGOWRIE 10 October 2021

For more details go to: @juniortourscotland

The Junior Tour Scotland has announced its 2022 Fixture List. The full schedule of events is below (click to enlarge). 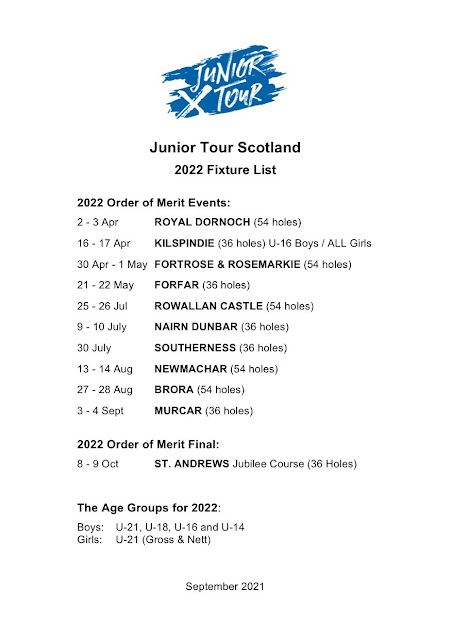 For more details go to: @juniortourscotland

What a cracking day for our P&K County Juniors & Seniors Event at the Strathmore Golf Centre, yesterday!

Fourteen P&K County Junior Girls were in action along with members of our County Team and Committee. The older girls had a competition on the big course, while the younger ones had a fun texas scramble on the wee one.

Many thanks to all the members of the Team and Committee that turned out to play and to Gillian Wallace our Junior Secretary who made it all possible.

We now have 20 County Juniors and counting! There are some Junior Girls' coaching sessions and another event planned for October. So, if you know of any more girls who might like to join in, please point them in our direction.

In the meantime, here's some photos of a brilliant day at Strathmore. The grins say it all! 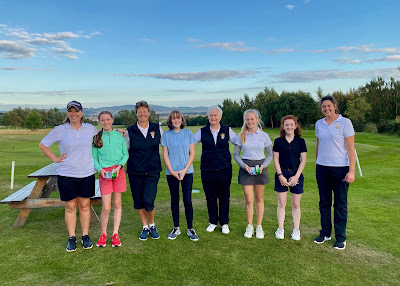 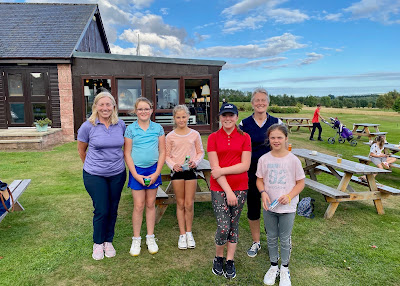 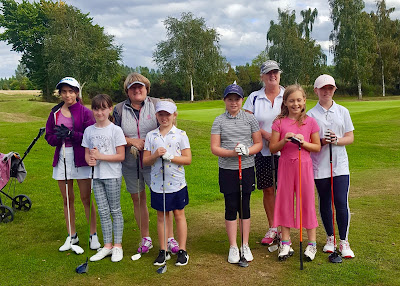 This year's Perth & Kinross Ladies' Champion of Champions will be held at Pitlochry Golf Club on Sunday 17 October 2021 (12 noon start). 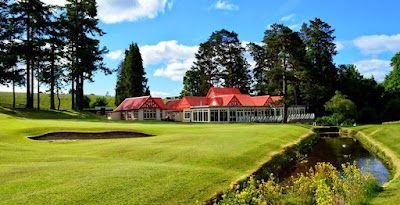 Invitations to all the Perth & Kinross Ladies' Club Champions (scratch) will be emailed out via our P&K Ladies' County Club Reps shortly.

Aberdeenshire has announced the NORTH OF SCOTLAND Ladies & Girls' Championships will be held at Newmachar Golf Club from 25-27 July 2022.

The NORTH OF SCOTLAND Ladies' & Girls' Championships are open to anyone who is a member of a Ladies’ County Golf Association in the North Division: Aberdeenshire, Angus, Northern Counties or Perth & Kinross.

Newmachar Golf Club, which is located on the north edge of Aberdeen, has two beautiful courses, designed by the world-renowned golf architect, Dave Thomas. Hawkshill, the championship course, is an absolute cracker to play.

"We believe that Newmachar Golf Club is a very appropriate venue because it is popular with golfers, provides an ideal golfing challenge, is relatively easily accessible for all potential participants, has accommodation close by and, with two courses, Hawkshill and Swailend, is perfect for the championship games and consolation round competitions."

"We are very grateful to Newmachar Golf Club for backing our very important North Division annual fixture. Special thanks to Paul Mills, General Manager, and to Management Committee members."

Entry forms and further details for the event will follow in due course.

Our final County meeting for the 2021 season, which was a Greensomes, was held at Blair Atholl today. 17 pairs took part. 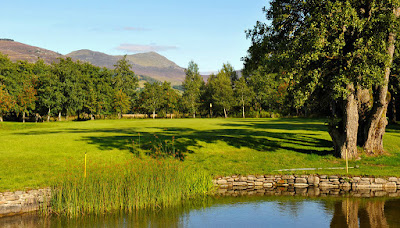 Congratulations to J. Kennedy & K. Fleming (Pitlochry) who won the Brown Memorial salver with the best nett score of 67.

Congratulations to Catriona Matthew and the European Solheim Cup Team. What an increadible win for Europe on American soil! 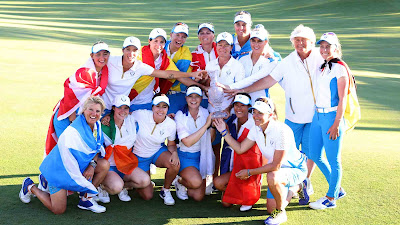 Team Europe retained the Solheim Cup after a thrilling 15-13 victory.

The sights were familiar, well-remembered by every golf fan from Gleneagles two years ago: a victorious Captain, Catriona Matthew, hoisted aloft by her beloved Team Europe on the 18th green, chants of "Olé, Olé, Olé” ringing out in cacophonous celebration, and the European team lifting the trophy overhead, having once again defeated the USA Team.

But this was a vey different victory. It’s only the second time in history that Team Europe has won the Cup on American soil — the only other time was in 2013 at Colorado Golf Club. Also, the European Team led wire-to-wire, looking unflappable in the face of home team advantage and a partisan USA crowd. And, instead of a veteran being the hero, as was the case with Suzann Pettersen in Scotland, it was a rookie from Ireland, Leona Maguire, who led the way for the blue and yellow and a rookie from Finland, Matilda Castren, who drained the crucial putt that sealed the deal and returned the Cup to Europe.

Catriona Matthew is now the only European captain ever to win back-to-back Solheim Cups. Thoroughly impressed with her squad’s ability she said:

“Two years ago at Gleneagles in Scotland was fantastic, but this time in America we were up against it. The Americans were a fantastic team this year. They played hard. We just perhaps holed a few more putts and we’re lucky we came out on top."

“I think we were a team of 12. They all contributed. One person doesn't win it, we needed all 12 of them, so just congratulations to the whole team.”

The draw for the Blair Atholl Meeting on Monday 13 September is below. The Greensomes is our final County meeting for the 2021 season.

Late Entries: We have room for one more pair. If you would like to come and join us, please contact Isla direct.

COVID-19: To keep everyone safe on the day, please ensure you comply with any COVID-19 instructions that Blair Atholl Golf Club may have. 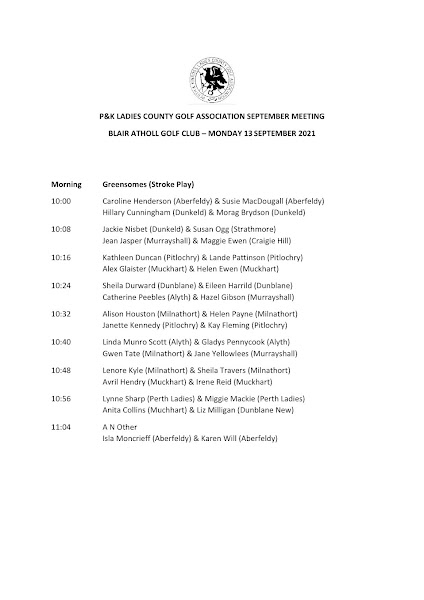 Huge Congratulations to Galloway County pairing of Teresa & Vanessa Ho, who won the Commonwealth Spoons Final at Dullatur on Monday! 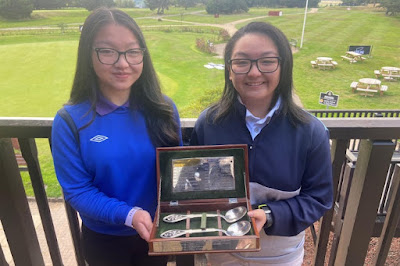 Also, many congratulations to our own Perth & Kinross County pairing of Hilary Cunningham & Morag Brydson (Dunkeld & Birnam) who put together a brilliant round to finish second.

Teresa & Venessa Ho (Newton Stewart) produced a fine back nine to win the 2021 Final over the Carrickstone course at the Dullatur Golf Club near Cumbernauld. The sisters were four over par at the turn but came home in three-under-par to post a nett one-over-par 73 and complete a three-shot victory over Hilary Cunningham & Morag Brydson.

Our other Perth & Kinross pairing of Janette Kennedy & Kay Fleming (Blair Atholl) were also on great form. They finished tied 7th with a nett 79.