A beautiful day, a lovely course and a warm welcome was order of the day yesterday at King JamesVI and home member Moira Chapman certainly took advantage of the conditions with an exceptional nett 66 over the par 73 course. Excellent scoring Moira well done! Jill Milne and Jane Yellowlees were also on great form as both returned a three over par scratch 76.

Full results are as follows:

Well done to all. Sorry for not having the scores posted last night however it was a tad late when I got home!
Posted by Dawn at 11:29 AM No comments:

As Gwen has had so many late entries for Tuesday 26th at King James I have deleted the original draw and below is the amended one. If you still would like an entry please contact Gwen. 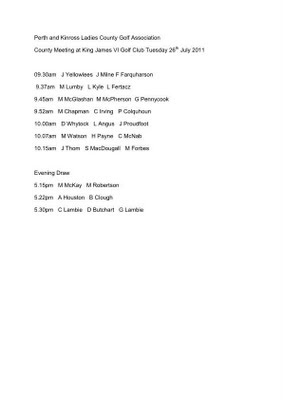 Following a great week at the Highland Open at Pitlochry last week Aberfeldy' Caroline Dunbar topped the leader board in both the scratch and handicap section of the County Meeting at Murrayshall today. Caroline returned an excellent scratch 76 nett 71 however as scratch takes precedence she wins the Coronation Trophy and the only other player to have a par nett score clinches the Handicap Quaich. Kay Knight (Pitlochry) last weeks winner of the handicap section of the Highland takes this honour and both will have a cut to their handicap as the CSS for the day was 73.

Full results are as follows:

Many thanks go to our convenor for the day Gwen Lambie.

Well done to all and just a wee reminder of the change of date for King James VI it is now Tuesday 26th late entries to Gwen Lambie please
Posted by Dawn at 10:58 PM No comments:

This week sees the SLGA Scottish Girls Championsip (Close) taking place at Glenisla Golf Course. Today is practice day then the first and second qualifying rounds are tomorrow and Wednesday. Following this a cut will be made for the final three days matchplay stages. The lowest 32 aggregate gross scores will progress to the match play Championship. The next 16 aggregate gross scores will progress to a second flight match play competition, the Ansley Reid Salver

We wish all girls the very best of luck and I will keep you updated how they fair.

Good Luck and here is hoping that the weather is a bit better for them all.
Posted by Dawn at 3:11 PM No comments:

Due to some late entries the amended draw for Murrayshall is below. Scroll down to see.

Gwen Lambie has requested that you send your entries for King James VI to her as soon as possible. The date for this is Tuesday 26th July

Many thanks
Posted by Dawn at 3:03 PM No comments:

LENORE BOWS OUT OF NORTH OF SCOTLAND

County Captain Lenore Kyle, our last P&K player in the North of Scotland, unfortunately bowed out of the 2nd round against Fiona Hay 5&3.

Well done for reaching this stage Lenore.
Posted by Dawn at 8:00 PM No comments:

Below is the draw for Murrayshall. For late entries please contact Gwen Lambie. click on the draw to enlarge.
Posted by Dawn at 3:34 PM No comments:

Just a wee reminder that the scratch league results are updated on the page on the right. My thanks to Gwen for keeping me posted, below is a copy of the results so far. Just click to enlarge

LENORE THROUGH TO NEXT ROUND

Captain Lenore Kyle is the only P&K player left in the matchplay stages of the North of Scotland. Lenore who is taking part in the handicap section won this morning and will play former Aberdeenshire Captain Fiona Hay this afternoon. Sorry but I do not have the scores from the handicap section as of yet.

Unfortunately all three P&K girls who were in the Scratch Section of the North of Scotland lost their place in the next round. The results were as follows:

P&K member Caroline Dunbar  played amazing golf today in what was very windy conditions and not only claimed the top seed but did so in real style with an amazing one-under-par 71 in the qualifying round for the match-play stages of the Highland Women's Open golf tournament at Pitlochry Golf Club.
Caroline must surely be the favourite for the title.  Junior P&K member Erin Millar was in joint second placewith 80.
We all wish Caroline and Erin the very best of luck in tomorrow's matchplay stages
The full results is as follows.
Leading scratch qualifiers
71 Caroline Dunbar (Aberfeldy).
80 Erin Millar (Pitlochry), Claire Capocci (Bridge of Allan).
81 Robina Gilbertson (Prestwick St Nicholas), Catherine Smith (Melton Mowbray), Sal Shepherd (Craigmillar Park).
82 Chloe Stokes (Ganton).
83 Leah Radford (Melton Mowbray).
Posted by Dawn at 7:53 PM No comments:

Congratulations to Steph Crolla, Eilidh Watson, Nicola Robertson and County Captain Lenore Kyle who have all made it to the Match Play stages of the North of Scotland. Eilidh, Steph and Nicola are through to the Scratch Championship and Lenore the Handicap Section.

Eilidh was our top scorer with a very credible 78 closely followed by Steph on 79 and Nicola with 80. Steph will play Aberdeenshire Scottish International Laura Murray, Eilidh will play Jemma Chalmers and Nicola plays Lynne Terry. Lenore returned a nett 79 and playes Ashley Smith.

Well done to all and I will let you know how they all fair tomorrow. Thanks to Lenore for keeping me posted!

The full matchplay draws are as follows:

More news regarding Club Championship, Strathmore Golf Club has a new champion in Junior P&K member Emily Aird who beat Emily Ogilvy in the 36 hole final 1 up.
Posted by Dawn at 2:56 PM No comments:

Along with Captain Lenore and Vice Captain Pat, 8 P&K members are taking part in the North of Scotland Ladies Championship this week at Nairn. The first round is under way today and we wish the P&K players all the very best this week:

Posted by Dawn at 10:59 AM No comments:
Newer Posts Older Posts Home
Subscribe to: Posts (Atom)