ALL COUNTY JAMBOREES IN SCOTLAND ARE CANCELLED

The four County Jamborees in Scotland have become the latest casualties of the coronavirus crisis. 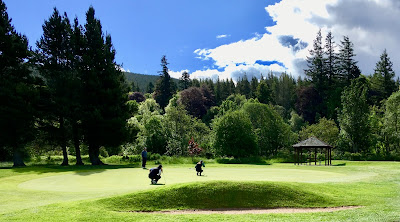 For those less familiar with ladies' county golf in Scotland, there are fifteen county organisations, split into four regional divisions. The North, East and West divisions have four counties each, whilst the South division has three. Each division holds an annual county jamboree to which each county in that division sends a team. The format is match-play. The county team that wins their division's jamboree earns a place in the Scottish County Finals and the chance to be crowned Scottish County Champions.

The first of the competitions to go was the Scottish Women's County Finals. It went from the fixture list when Scottish Golf cancelled all its competitions on the 9 April. The move came only two weeks after the government had imposed the current lockdown. It was a shock to all.

The next to go were the three county jamborees scheduled for June. With no end to the lockdown in sight, the county captains for each of the West, South and North divisions decided in turn that they had no option but to cancel. By the end of April all three jamborees had gone.

This week, the last of the county jamborees in Scotland bit the dust. As the event was in July rather than June, the East Division captains had decided to defer the decision about their jamboree for a bit longer. This week, with no real hope of the event going ahead, they bowed to the inevitable and cancelled.

This the first time since the second World War that the Scottish Women's County Finals has missed a year. This is also the first year that there will be no county jamborees held in Scotland.