NORTHERN IRELAND CAN RETURN TO GOLF

The Golfing Union of Ireland has confirmed that from today golf clubs in Northern Ireland can reopen their courses for members. 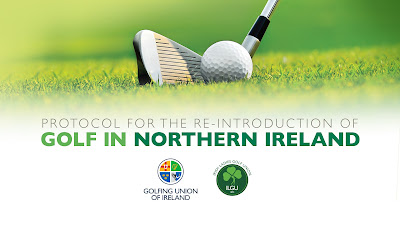 Last week, Northern Ireland's Executive published its five-phase blueprint for recovery in Northern Ireland. Although the lockdown remains in place and the next formal review date is not due until Thursday 28 May, the Executive decided to allow some aspects of the first phase to start this week.

At Monday's daily Covid-19 briefing, Northern Ireland's First Minister, Arlene Foster, announced that some "outdoor activity where social distancing can occur" could now proceed. She went on to confirm that golf would be one of the few outdoor activities allowed to restart, adding:

The Golfing Union of Ireland (GUI) & Irish Ladies Golf Union (ILGU) had already published a "Protocol for the Re-introduction of Golf in Northern Ireland" at the weekend. Northern Ireland's First Minister urged everyone to stick to those guidelines.

The GUI & ILGU also stressed in their introduction to the Protocol:

"As one of the first sports to be allowed to resume, there is a major responsibility on golf clubs and golfers to ensure that our sport is conducted in a safe and responsible manner. Full adherence to the provisions of this Protocol is absolutely essential."

"It should be noted that the Executive continues to monitor the situation closely and have not ruled out the reintroduction of restrictions which could see golf clubs closed once again, if the Protocol is not followed."

Some confusion surrounded the First Minister's announcement as she had not confirmed a date for when golf could restart. In the end, it fell to the Golfing Union of Ireland to clarify that golf clubs in Northern Ireland would be able to reopen their courses from Wednesday 20 May.